San Andrea degli Armeni charm B&B**** is located in the center of Taranto, Apulian city and ancient Greek colony open on the homonym gulf of the Ionian Sea. The historical center of Taranto is commonly called “Old Town“. The property is located in Via Paisiello, at N°. 20, at the corner of Piazza Monteoliveto and consists of an old building made from the ground floor and two upper floors situated in front of the birthplace of Paisiello, the Gallo Palace, the Santuario Mariano della Madonna della Salute, already Monteoliveto, and contiguous to the church of S. Andrea degli Armeni (1373-1573), which was the rectory and the sacristy. The Armenian Church of S. Andrea degli Armeni was built in 1353, but some reports back to the fourteenth century presume that the building could date back to medieval epoch, even if unfortunately, such testimonies do not allow to hypothesize its order inside the neighborhood or the same architectural structure.

There are not in Taranto further testimonies regarding a possible cohabitation of Armenian and Apulian people save for other shed constructions in the region that look like to confirm this hypothesis. The first Armenian reached Bari at the end of the Xth century, during the Byzantine reconquest. We remember besides how Armenian and Apulian people shared during the XIVth century the same enemy, the increasing Turkish power and the consequent power of the Islamic religion against Christianity.

In 1554, in fact, the Turkish pirates garrisoned the islands of S. Pietro and S. Paolo for six months and the Taranto inhabitants were forced first to fortify the walls along the northern and southern coasts and on the other to build a wall with a sloping embankment along the canal. And so, while outside the city took on shapes drawn by the war, inside almost certainly, you could really find the religious unity bridge of union between the Roman and Indo-Greek civilizations. 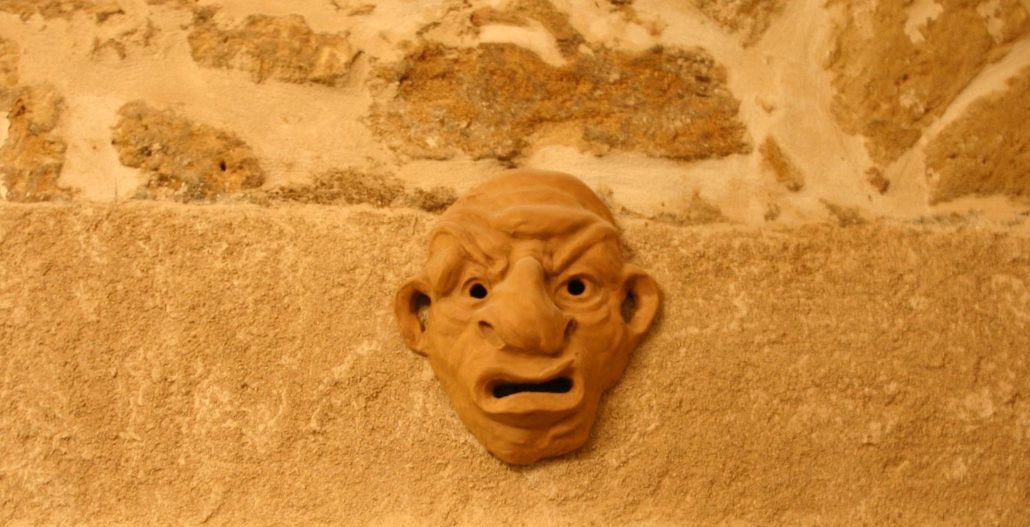 In 1573 the Abbot Scipione de Aricia reconstructed the church of S. Andrea degli Armeni in the same place where was the eponymous medieval church, that, at what it stands in the “Chronicle” of the Notary Casullo Angelo from Taranto, the church was bombed by King Ladislao.

The reports drawn up by the Archbishops of Taranto prepared in response to the Council of Trento, which required the dioceses to provide a detailed report of the goods of the Church are conserved in the Archbishop Library of Taranto. Such document dates back to the pastoral visit made in January 9th 1609 by Bishop Frangipane, that proposes, at this juncture, a translation from Latin:

The 9th of the month of January 1609 in Taranto, quoted on the visitors, following on the above cited visit, together with the aforesaid assistants came to visit the Church of S. Andrea degli Armeni, located in the city of Taranto, in the neighborhood Baglio, between the borders of that neighborhood and the neighborhood of S. Pietro, in the convicinio and contrada said of S. Andrea, near the houses surrounding the church.

The history of the block is easily summarized by the historical information of the ancient church of S. Andrea, a landmark of the Armenian community of Taranto. This church replaced in the 1573 the homonym building of the second half of the fourteenth century (1386), but certainly of much older origin judging from the title of the dedication (S. Andrea degli Armeni) and almost certainly connected with the Armenian group of people permanently there after being recruited by the Byzantines in the eleventh century, together with Russian troops, Turkish, Bulgarians, Vlachos and vareghe (see N° Oikonomides, les listes de préséance Byzantines des IXème et Xème Siècles. Paris 1972).

Of such building it is impossible to assume either the shape or the texture. Before 1573, date of the establishment of the actual structure, the block was characterized  not only by the Church, but also from a garden behind the apse of the same church, from a hostel (similar structure to an inn) situated nearby the garden and today testified, perhaps only in the basements, a series of one-storey homes, including, probably, the one with the room on arch located along the south side of the actual block. Very little is known about the appearance of the northern facility. The medieval old factory and some adjacent properties were demolished to make way for the present church and three modern houses located contiguous to it. Two of the three houses were “Palaces” and were divided into living room, bedroom, staircase posts and services, almost certainly, on the ground floor. 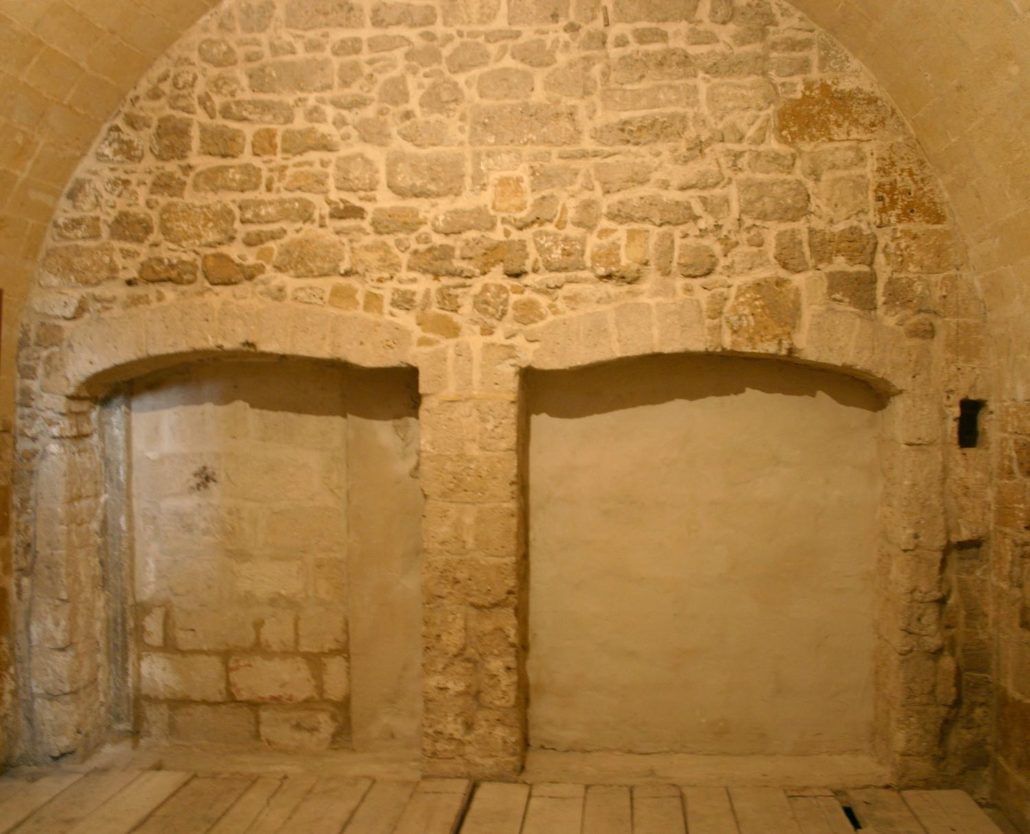 The other house contained a single room and a “restricted“. There was also a staircase leading to the terrace. The part of the building pending to the first floor certainly dates back to the end of 600, while according to plan the second floor dates back to 800, probably to the first half of the century.

The “pittaggio” was articulated by three main roads, Via di Mezzo, the road known as S. Costantino (certainly Via Duomo) and via delle Fogge (now via Paisiello) named, for the presence of numerous underground storage facilities which suggested a possible commercial destination, name deriving probably from Latin fovea, cavities, depressed spaces, hole to store Grain, etc.. The “Pittaggio” ended in its western side in front of St. Andrea, the overall shape was a developed structure in buildings that hardly raised above one floor. The neighborhood had shops, homes, furnaces, mills and many spaces for gardens and orchards, often set in the back of homes and churches. It is from the late 600 that the reports are permanently altered. The phenomenon will continue throughout the 700 and will end, worsening towards the end 800. The houses were transformed into palaces, very disproportionate.

The rational setting of the building seems to derive from a building designer, remained anonymous, training in Alberti school, for the obvious feedback with the rules of the Treaty of architecture of Alberti. The building mostly remained in the same original shape and decoration from 500. The outside has a great façade of derivation from Alberti formation; immediately under the pediment there is an eye that dramatizes the eurhythmics of the outside plant. The interior consists of a single longitudinal chamber which leads to the raised presbytery, the attention turned immediately to the splendid vault on recessed. The presbytery has a vaulted lowered arch. From the presbytery it is possible to reach the sacristy, contemporary to the building, through a door post in “carparo” calcarenitic stone. The recent restoration has revealed some sixteenth-century frescoes. 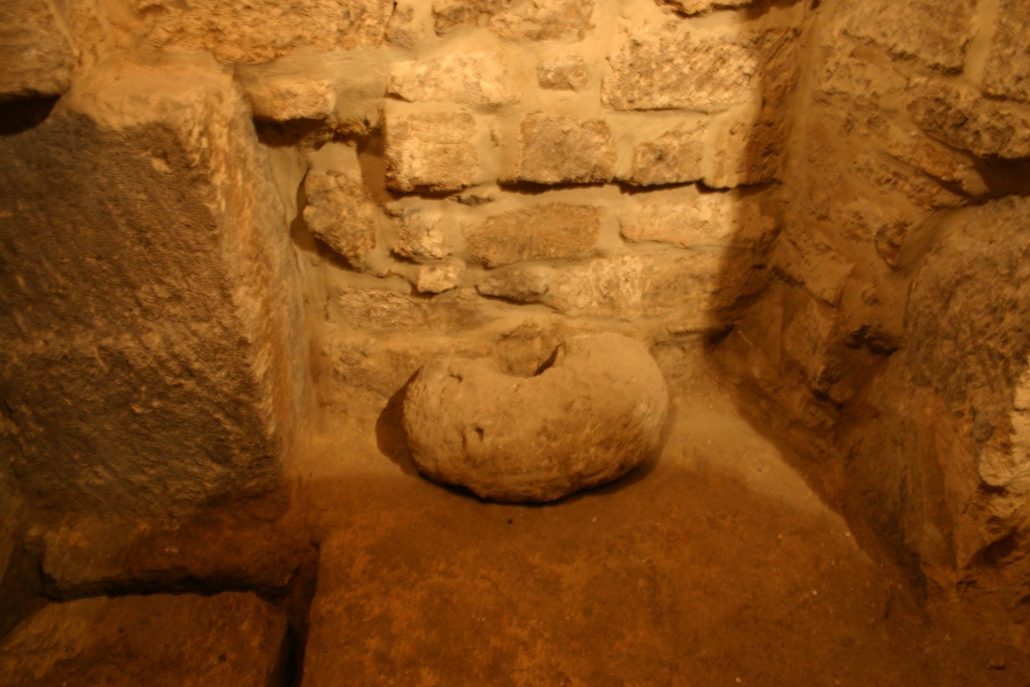 The decoration consists of series of rosettes framed by fake drawers in the intrados of the arch and spirals that crossed the pillars slightly protruding from the bottom surface divided into fake isodomic ashlar. On the pediment of the gable ends, you may notice two sculptures now corroded by weathering, representing a man and a woman. The female statue, unidentified, is headless and the sculpture of the male figure appears in the act of breaking or keeping his hands either side of a column. This sculpture could have a double interpretation. According to Novello Alpago it may have been inspired by Armenian folk legend of the “good” and strong man that can break the columns, or a commemoration of the sad events of Armenia for long invaded and devastated.