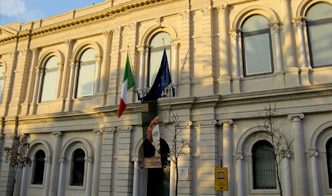 In the museum you can find old Greek and Roman mosaics, potteries, antefixes, funerary vascular, Attic black-figure pottery, ceramics of Gnathia. A special section is dedicated to the famous gold and silver of the sixth-seventh century. AC. 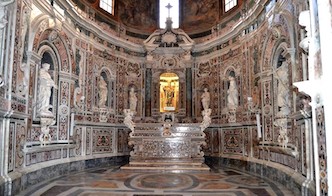 A particular itinerary, practicable walking, it is the one through the streets of the old Taranto, a synthesis of Greek, Byzantine, Arab, Spanish and Swabia cultures, for centuries strengthened city, beyond the boundaries of which the expansion was prevented until the Constitution of the Italy Kingdom.

The intersection between the medieval Via di Mezzo with the Postierla Nuova divides the island into four neighborhoods, called pittagli; at northwest “ponte” at north-east Turripenna, both on Mar piccolo, “San Pietro” at south-West and “Baglio” at southeast, along the Mar Grande. The term postierla indicates the narrow stairways (some of which follow the route of the antique Greek-roman Acropolis) that conduct from the upper part of the island to the neighborhoods that are untied along the Mar piccolo to the antique harbor Greek medieval, where are landed the boats of the fishermen.

A place apart is up to the baroque architectural treasures of the old town of Taranto (the Cathedral, the splendid Cappellone of San Cataldo and many noble buildings) at the ruins of the temple said of Poseidon, to the Romanesque church of San Domenico with the splendid staircase and, guarding the fairway with the swing bridge, you discover the Aragonese Castle.

MARTINA FRANCA, THE BAROQUE AND ITS MARKET 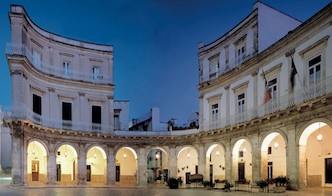 31Km – Walk in the beautiful historic center of one of the most famous cities in the province of Taranto. Known for its beautiful baroque churches represents the “flagship” of the Itria Valley. Small village protected by San Martino, is fascinating for its baroque architecture, its narrow streets and antique palaces. A stroll among the stalls of the local weekly market (Wednesday) consent you to discover the daily life. 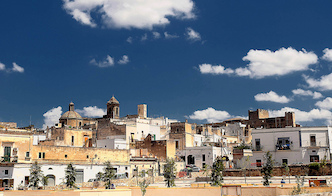 Visit and shopping at the Grottaglie ceramic area. Visit to the Museum of handicraft potteries and cribs of Grottaglie at the Episcopio Castle, visiting hours 09.30-12.30/17.00-21.00. Free entrance 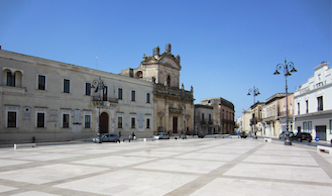 Visit the old town and the archaeological exhibition “Beyond the Walls” and the Museum of Primitive Wine at the Wine Producers Consortium with free entry and wine tasting.

ALBEROBELLO AND THE TRULLI VALLEY 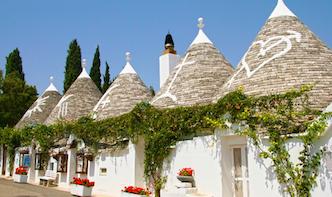 You will be captivated by the charm of the Apulia countryside with bizarre constructions the “trulli” scattered among the olive trees. It is precisely the trulli to confer originality at this part of Apulia, with its conical construction.

The Trulli village has been declared World Heritage by UNESCO.

LOCOROTONDO AND THE WINE CELLARS 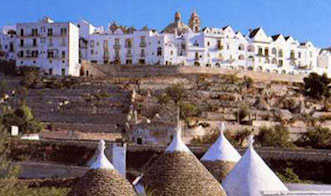 Visit of the picturesque town and the wine cellars where is produced the most excellent white Locorotondo Doc. 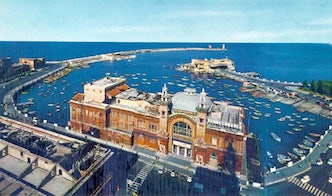 Only at 78 km on the Adriatic coast, stretching eastward, it is the capital of the region. It is a city full of historical-artistic interest. The majestic presence of the castle  of Federico II di Sveva, in which symbolic traces of plasters and Baroque decorations remained, there are prominent flanked Romanesque buildings as the Cathedral of San Sabino and the famous Basilica of San Nicola. 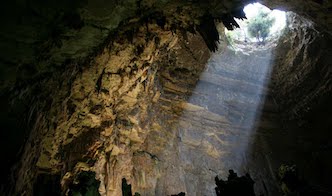 35 Km. Born in the heart of a karsts area and of extraordinary interest, characterized by the presence of the famous Caves. Discovered in 1938, the Caves offer a splendid scenery of stalactites, stalagmites, tunnel and cavities whose famous Grotta Bianca is the best example. 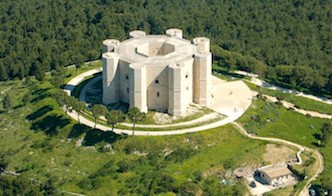 80Km – located on a hilltop surrounded by woods, this construction, dates back to 1240, is certainly the most famous estrus architectural testimony of Federico II di Sveva; Hunting lodge for the king himself, the mysterious building is characterized by its octagonal shape as well as its towers that create an indecipherable spectacle of lights and shadows. 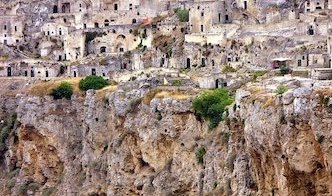 70Km – 70 km behind the edge of a canyon created by a stream erosion, rises Matera, “City of Stone.” Most emblematic example of troglodyte city, where people used the natural caves for habitation, Matera has a valuable collection of archaeological material chronologically of distant age: prehistoric, roman, medieval and baroque. 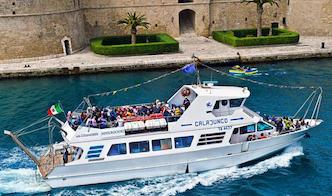 Walking distance from the S. Andrea degli Armeni charm B&B**** to the embarkation point for beautiful excursions and short cruises on the Mar Piccolo and Mar Grande on board of the Calajunco. The boat is made entirely of wood, has a capacity of 150 passengers, toilets are available. Radio equipment, air conditioning and a small bar are available on board. The average length of navigation is about three hours (depending on the type of itinerary) allowing you to admire the beautiful sceneries which is particularly striking in the daytime as well in the night-time. 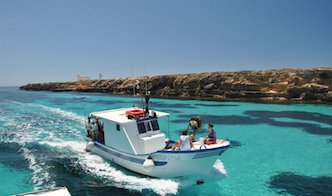 Possibility to spend a day with the fishermen